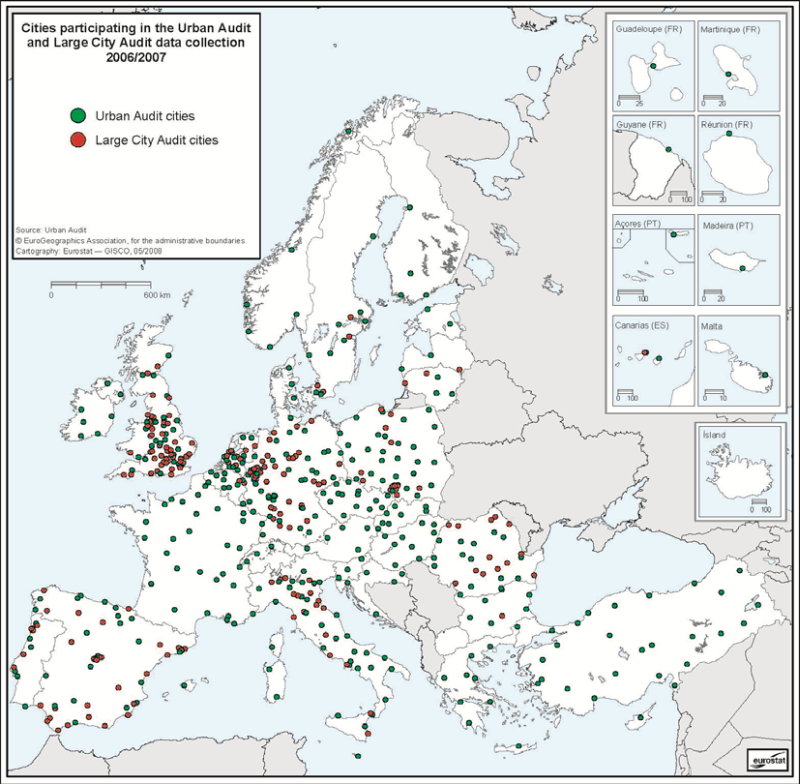 The Urban Audit data collection is an increasingly important tool for assessing economic and social trends in European cities. It is the first full-scale European database for the collection of comparable statistics and indicators for European cities.

More than 300 indicators are calculated in the Urban Audit, covering most aspects of quality of life. These indicators are derived from the 336 variables collected by EUROSTAT. Data availability differed from domain to domain: in some cases, data was available for more than 90% of the cities, in others only 50%.

At the start of the project, the Urban Audit included 321 cities from the EU-27, 26 Turkish, six Norwegian and four Swiss cities. Data collection in five Croatian cities had started. Data were collected for the core city (administrative concept), for the Larger Urban Zone (=LUZ) and for Sub-City Districts (SCD). For six capital cities “kernels” had been defined additionally in order to reflect particular spatial dimensions in these cities and thus to facilitate better comparisons. As the data came from many different sources, not only from National Statistical Offices but partly also from the cities themselves, the definitions provided of the variables were not consistently respected. This led to a large incidence of data gaps and footnotes, which were not always taken into consideration by the users of the statistics.

The project team computed estimations for the most important information of the Urban Audit dataset, around 50 variables. This included both, estimations of data gaps and evaluation of deviating definitions of the data for certain cities or countries on whether that data were comparable to other cities or not comparable to a significant extent. If not comparable, a new value was estimated. These estimations have been accomplished both for the core city level and – where it applied – for the Larger Urban Zones (LUZ). Estimations have been done for the latest dataset, i.e. reference year 2004.