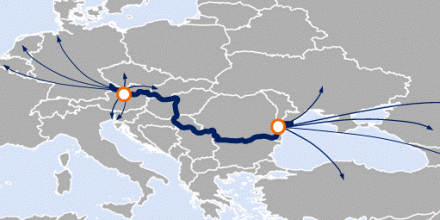 Whereas traffic growth in the Danube Corridor has been extensive in the past and growth continues in the aftermath of the 2009 economic crisis, the role of River Danube transportation still is modest. Partly these shortcomings are due to a lack of combined liner services on the Danube.

The objective of KoLEG Study is the implementation of a combined liner service between Enns and Galati. Consequently the liner service will address clients who need favourable and reliable connections between Western Europe, Austria and Romania, the Ukraine, the region of Krasnodar as well as other markets located along the Black Sea and the Caspian Sea. The liner service will provide regular departures at Enns and Galati in order to reach a permanent shift from road to waterway transport.